Due to his personality, Nomura has established various relationships with all characters throughout the series. He is capable of earning the respect from the girls in Supreme Five Swords after being able to defeat them one by one (Tsukuyo Inaba is the special case as he is no match for her yet).

According to himself in Episode 8, Nomura grew up as an orphan with no memory of his parents' faces or names. It is unknown whether they abandoned him or passed away in an accident, but there is no reason for their absence in his life have been made.

Nomura was adopted by his grandfather, who was also a master swordsman. It is unknown whether they are actually related or if he is still alive. However, it seems their relationship is greatly strained as his grandfather saw great talent in the boy and put him through intense physical training everyday to master the ways of the sword. Life took a hard turn for Nomura, as while this training made Nomura incredibly strong, it came at a hefty cost. His grandfather put him through intense physical and emotional abuse which broke his body and spirit, as such he became unable and unwilling, to use a sword again. His experience caused him to develop a hand to hand fighting style to compensate. Which also led to the creation of his Magic Bullet.

Nomura started off at a bad start with Rin as he openly rebelled against being corrected and dressing like a girl as the other boys did. He fought against her and ended up defeating her in the battle and kissed her by accident which shocked both of them. She also gets jealous when other girls get to close to him and is the common tsundere. Rin was very angry to see pictures of Nomura with Satori and administered torture on him only to stop after seeing the scars on his back from his previous experiences.

As the series progress, they have formed a close bond as comrades who trust each other when in combat. Their bond is truly deep as she apologized for accusing him of being with Satori and she confided in him over her tragic past. In response, he felt it right to reveal his own of being an orphan and dealing with his abusive grandfather who was his guardian.

Rin has developed romantic feelings for him and its hinted he is aware of her feelings but chooses not to acknowledge them. He doesn't show any visible feelings to her but deeply respects her and he is protective of her when he slapped Satori for making Rin cry after she framed him.

The two started off on a rocky start with Mary thinking that Nomura was a simple pervert like the rest. Though this was taken out of the equation, when Mary told Nomura to fondle her breasts for losing to him. Nomura, however, declined and stated he would not be coaxed into anything like that, she devised a way to get him to through means of putting her stamp in between her breasts. Though tempted, Nomura once again refused such actions and stated that he would not do such a thing because although he would enjoy he didn't like being coerced.

Realizing that not all men seek to satisfy their carnal desires, she submitted to him and declared herself to also be his supervisor alongside Onigawara Rin. Following this, it appears Mary has developed feelings for him which deepen as the series progresses. This was seen as she was visibly annoyed with most of the girls fawning over him after he defeated Warabi Hanasaka.

She also attacked him when he was blackmailed by Satori Tamaba with a compromising picture. Mary was very angry to see the pictures of Nomura with Satori and administered torture on him only to stop after seeing the scars on his back from his previous experiences.

However, in Episode 8 after Satori tells Mary the truth about the incident, Mary apologizes to him stating Nomura could do whatever he wanted to her body. Once again, Nomura declined stating: "Nah, I'm good" as she was surprised by his quick and uninterested answer.

It has been shown that she is interested in him and she is considerably jealous when Nomura doesn't acknowledge the changes she made to herself. As with Rin, he is hinted to be aware of her feelings for him but chooses not to acknowledge them though he deeply respects her, in spite of her masochist fantasies.

Because she kidnapped Masukodera, Nomura participated in her games where he dealt with her followers as well as her pet bear until he confronted her. Even though Masukodera was rescued by unknown girls wearing masks, he still battled against and was able to defeat her. Nomura earned both Hanasaka's respect for his skill and strength in their battle. Also through this feat, Nomura became very popular in school for both his courage and willingness to save his friend. Hanasaka doesn't appear to have a crush on Nomura like the other Supreme Swords but she and Nomura have been put in compromising situations. It seems that she may have some feelings for him but keeps it to herself.

When Nomura first met her, he was put off by her nature which couldn't allow him to get a read out of her. Satori also had no problem in kissing him as she blackmailed him and was not afraid when she was standing completely naked before Nomura. The two later fought and Nomura won the fight after dealing with several attacks from Satori when he finally got a read out of her.

It is shown she started to have romantic interests in him, after he pointed out her showing off an annoyed emotion after her loss. She also seems to care deeply for him, like protecting him from Tsukuyo when he was all exhausted and carrying him to the infirmary when he passed out, but she also likes to tease him sometimes. When she was in danger in front of Amou, she thought about Nomura-chan and she wished if Nomura-chan could be able to come to save her.

At their first encounter face-to-face, Nomura underestimated Tsukuyo a little because she is a middle schooler and his fights against other members of the Five Swords, whose abilities are quite equal, were not too hard. However, after failing to see her draw out her sword and put it back to its scabbard, he immediately realized in fear that he cannot win yet. She and Nomura studied similar sword style therefore have a certain respect for each other, but Nomura discontinued his training because of his grandfather's physical abuse to him. She constantly rants about his mistakes in his fighting style (which Nomura put up with since he didn't complete his training). Tsukuyo even dislikes Nomura's tendency to ignore her even yelling at him as a result, showing genuine emotion that shocks even herself.

Despite this tense standing, Nomura saved Tsukuyo from being attacked by Amou as she questioned his reason stating they weren't friends before believing he wanted to befriend her, which caused her to get flustered and blushed as he was confused by her words. Nomura states he wasn't trying to be her friend, to her surprise. However, he did tell her what it means to be someone's friend, which made Inaba think of him in a new light.

After Nomura managed to defeat Amou Kirukiru, Tsukuyo decided to become his next martial art teacher, and was later accepted by showing the upgraded Madan. She has a tendency to attack Nomura for matters that aren’t his fault. When she went into the males bath at a resort to avoid the other Fives childish fight, she attacked him out of pure embarrassment when he pointed out she went in there.

At first, the girls all viewed him as a delinquent like the other boys at the school and were nervous around his presence. One of the male students Masukodera who became his roommate advised Nomura to follow the rules of the Supreme Five Swords but the latter refused to comply as he felt free to do as he pleased at school. After Nomura defeated and accidentally kissed Rin, their dislike grew and Nono, the right-hand woman of Rin wanted to inflict pain on him and was joined by Choka the right-hand of Mary but they were easily defeated and humiliated. When Masukodera was kidnapped by Hanasaka Warabi, a majority of girls watched as Nomura fought to free him even taking down Kyo-bo, a large bear before defeating Hanasaka Warabi herself.

Following this, Nomura's reputation changed as most of the female students started fawning over him impressed by his strength and great kindness for his friend. He appeared to greatly enjoy the new attention from the girls, though was somewhat worried as it caused a jealous Rin and Mary to punish him for no reason.

In past before transferring into Private Aichi Symbiosis Academy and becoming known as the "Empress". She pretended to be a man and controlled the school as she was obsessed with the concept of dominance, in that school she met the newly transferred Nomura. They started off as good acquaintances as she acknowledge his abilities and may be at some point considered him as a friend.

This relationship did not last long however as Nomura made a new friend which he saved from a group of bullies. His friend decided to repay the favor by showing him around the school. Amou heard this conversation and decided to show him around the school herself in order to know more about him, which Nomura rejected as the latter already decided to go with his new friend. This rejection triggered some feeling on Amou which can be taken as jealousy. This jealousy leads to her hurting Nomura's friend that starts a fight that made them get transferred in the first place.

That conflict continued at Aichi Academy when Amou beat other girls due to their "close" actions to Nomura. It was over only when he explained to everyone about friendship and managed to defeat her. Upon hearing of Amou having transferred to another academy, Nomura caught up with her at the airport to see her off. There, he felt happy because she always likes him from the beginning, and him too. Nomura was very surprised when Amou kissed him and blushed as a result. Amou even stated to him to tell the other girls to say that he belongs to her. Nomura understands what that means. It is also hinted that Amou is a Yandere. A person who is obsessed with someone else and will kill anyone who tries to take their love interest. This is backed up further when Amou stated that if she can't have Nomura, then no one else can have him. 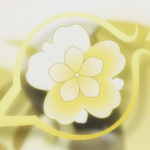 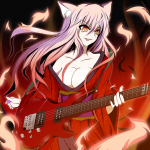